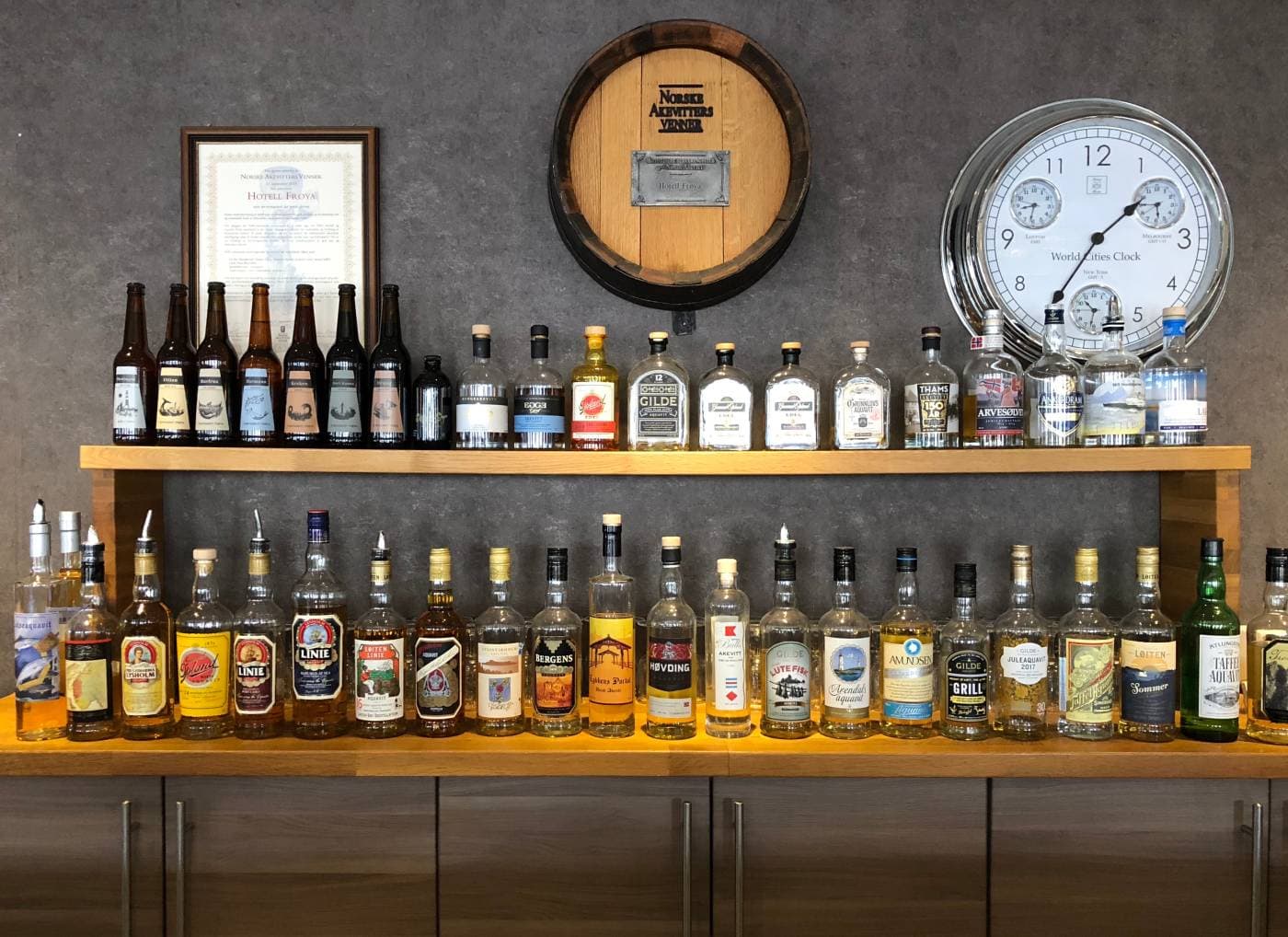 In the early 14th century about the time Christianity was introduced in Norway, a number of monks around the country were mastering the art of distillation. I have no idea why monks were making spirits. However, their efforts produced one that would ultimately become one of Norway’s finest cultural treasures.

Thinking they had made an all-curing universal medicine that would be able to combat every disease and even reverse aging, they named it Aqua Vitae–Water of Life.

Distilled from potatoes and flavored with spices–typically caraway or dill–Aquavit remains uniquely Nordic. Familiarize yourself with Norway’s firewater on the Aquavit Trail. Winding through jaw-dropping scenery past inviting farmhouses and even to ancient aquavit distilleries, the Aquavit Trail introduces us to the Nordic flavors of the Trøndelag region. Considering much of the local fare has been voted the best of its kind in the world, it’s definitely not a bad way to spend a day or two.

My experience along the Aquavit Trail began in Trondheim which is the birthplace of Linie Aquavit—Norway’s oldest producer of aquavit. Linie Aquavit has an unusual maturation process that was discovered accidentally.

The ship Trondheim’s Prove set sail in 1805 with a cargo of dry fish, ham and cheese to Batavia—now known as Indonesia. The cargo also included 5 liters of a potato spirit in oak barrels which went unsold. After crossing the equator on the return trip, the crew opened the barrels to celebrate. The taste was unexpected–perfect! During the journey the potato spirit had matured into what we know today as Linie Aquavit.

The process remains unchanged to this day with the liquid still sent to sea for maturation. If you look through the bottle at the back side of the label, you’ll find the name of the ship that carried it across the equator along with the date it sailed.

Along the Aquavit Trail

I first sampled aquavit in Trondheim—and, of course, it had to be Linie Aquavit. As I savored the burn of the 43% alcohol and tasted the distinct flavor of the caraway, I knew my plan to sample as many varieties as possible in the next two days was not going to be a problem.

The Aquavit Trail winds along the Golden Route. As we all know, man (or woman) cannot live by drink alone. I paced myself with visits to farms along the way. Serving as a feast for the eyes, postcard scenes of snow-blanketed fields appeared at every turn. First I stopped at the Gangstad Farm. Astrid Aasen shared her freshly-made cheeses and licorice flavored ice cream. Next, at the Husfrua Farmhouse it was cake and coffee. These much-needed breaks tempered the 43% alcohol effect of the aquavit! I also visited an ancient aquavit distillery with a cave-like tasting room straight out of medieval times.

Break Time with a Viking (& Chocolate)

Even the heartiest aquavit sampler needs a break. Mine came at Klostergarden Farmhouse where my focus switched to finding the best beer to pair with future shots of aquavit. Jorn Gunnarson Anderseen (who looks exactly like a Viking I once met in a dream) brews a variety of craft beers and serves beer-infused chocolates. There’s really no way to go wrong with that combination.

Eventually the Aquavit Trail led me back to Trondheim and the utterly charming Baklandet Skydsstation. There I savored a lunch of herring—some pickled, some sweet. And, of course, more aquavit. Every bit as charming as her cozy café, owner Girli Riis Holmen provides another uniquely Norwegian experience. Be sure to check out the backyard!

Should you wish to conclude your aquavit experience with a nightcap, Macbeth’s Whisky & Aquavit Bar merges the fire power of two nations with an extensive selection of Scottish whisky and Norway’s liquid treasure.

After a day or two of aquavit, locals declared me an honorary Norwegian…it could happen to you too!