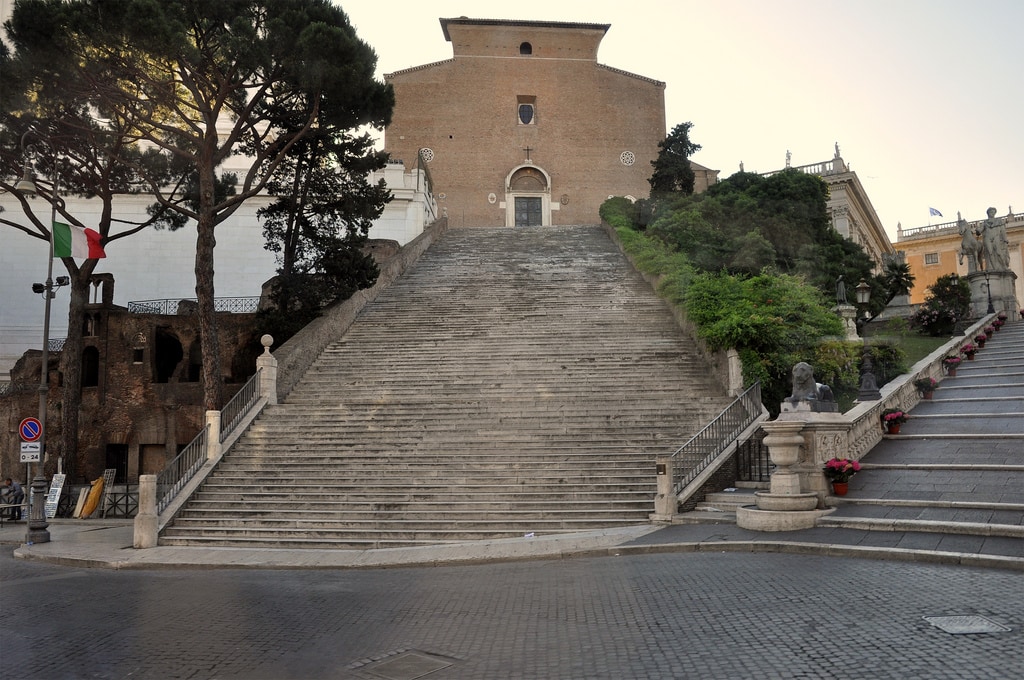 The Basilica di Santa Maria in Aracoeli is the stunning location for the final performance by the Mater Dei Catholic HS Performing Arts travelers with iNSIDE EUROPE over Easter 2020.

The Church on the Hill

This beautiful church sits on the highest summit of the Campidoglio, one of the seven hills in Rome, and remains the designated Church of the city council of Rome. Unquestionably one of the most adored churches in Rome, it is revered for its history and its beauty. A primitive foundation of the first church is said to have been constructed in the sixth century. Importantly, in 1320, after the location changed hands many times, it was restored by the Franciscans after Pope Innocent IV turned it over to them in 1249.

The “Stairway to Heaven”

To see what this church has to offer on the inside, you must first climb the famous staircase, constructed in 1348, which leads to the front doors of the church. Often referred to as the “Stairway to Heaven”, the staircase is completely fashioned from marble and consists of 124 steps that lead to the Alter of Heaven. Additionally, legend has it that any visitor who climbs the stairs on their knees will receive good luck. Fun Fact: you only climb 122 steps if you start on the right side of the staircase.

The climb up these marble stairs is well worth it, because beyond the main doors is where this church shines. Inside the church you will see twenty two columns, no two exactly the same. These columns were all taken from the Roman ruins, giving each one unique details and stories. Furthermore, if you take a look at the third column on the left, you can see the Latin inscription “a cubicolo augustorum” which translates to: “from the chambers of Emperor August”. Looking up, you will see the wooden ceiling painted with nautical scenes depicting the Battle of Lepanto, where the holy league defeated the fleet of the Ottoman Empire.

Undoubtedly, the most well-known artifact in the church is the Santo Bambino. This statue of the baby Jesus was carved in the fifteenth century from olive wood from the Garden of Gethsemane. It was once believed that this statue of baby Jesus could heal the sick, and even had the power to bring back the dead. In 1994, the beautiful jewel encrusted statue was stolen from the church and never found. Nonetheless, a replica is there today and is brought to the high alter every Christmas Eve, one of the most famous Christmas traditions in Rome.

In conclusion, the Basilica of St. Mary of the Altar of Heaven is a truly breathtaking venue for MDHS travelers to perform at and visit. Particularly, the link between Mater Dei’s patroness, the Blessed Mother, and the history and features of this beautiful church make it a must visit location.