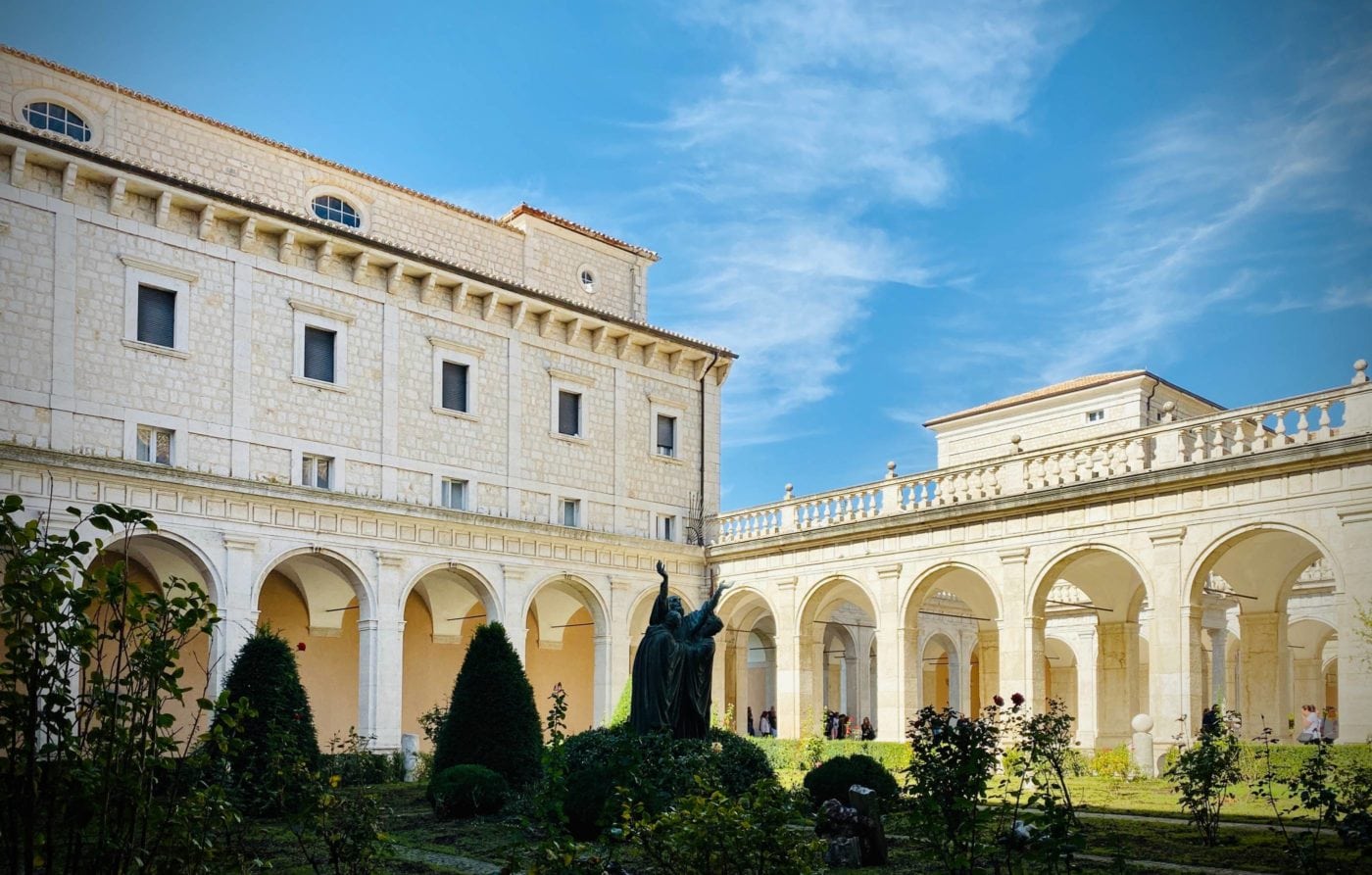 Dramatically located in the mountains of the Lazio region, between Rome and Naples, this beautiful abbey was the first monastery of the Benedictine Order. Montecassino Abbey was established in 529 by Saint Benedict of Nursia, the patron saint of Europe, who is considered the founder of monasticism in the West.

Nowadays, the Abbey of Montecassino is one of the most well known abbeys in the world. First and foremost, in 529, Saint Benedict selected this mountain to build a monastery that would serve as a place for him and the monks following him on the way from Subiaco. Paganism was still present, however, Benedict’s goal was to establish a monastery where Christians could be safe while praying and working.

A Beacon of Hope

Throughout the centuries, the abbey has seen elegance and annihilation many times, and has always come out of its ruins stronger. Above all, four times in it’s history the abbey has seen chaos and destruction and has risen from the ashes. From natural disasters to war, the abbey has seen ruins but has always been faithfully rebuilt. Known as the “Lighthouse of Western Civilization,” it stands prominently atop its mountain as a beacon of hope and an important landmark for those traveling through the area.

Notably, St. Benedict lived by the motto “ora et labora et lege” which translates to “pray, work and read.” Even to this day, the monks still follow this rule as part of their monastic lifestyle. From daily prayer and diligent study to providing people with a moment of serenity to achieve peace, the Benedictine monks are a living, breathing exemplification of their founder.

Everyday, pilgrims and travelers from mainly Italy, but also all over the world visit Montecassino Abbey, the final resting place of St. Benedict. Silently and slowly, visitors make their way through the cloisters and up a large ramp that leads them to the basilica where they can enter the tomb aka the “Golden Crypt”. This area is adorned with breathtaking golden mosaics. Next, a museum awaits guests that includes ancient books and artifacts as well as elaborate paintings. A visit to the museum takes you through the history of the abbey from its founding through present day.

To sum up, Montecassino Abbey has a rich history that is still evident today. With its historic artifacts and deeply rooted Benedictine philosophies still present, this is a stop that should not be missed. And there are some glorious vistas, plus a gift shop with unique souvenirs (most locally produced of from monasteries around the world) that add to the visitor’s experience beyond the historical significance.

The Mater Dei Vocal Artists will visit and perform at Montecassino Abbey for visitors as well as family and friends traveling alongside over Easter 2020 as part of their ALLELUIA Italy + Vatican performance tour — on their second iNCANTATO CONCERT TOURS by iNSIDE EUROPE experience. In 2011, the choir from Mater Dei Catholic High School in Santa Ana, California, sang here for the first time. Director then was Mr. Scott Melvin: “We are very much looking forward to returning. It is a special place indeed!” In 2020, the choirs are lead by Mrs. Jodi Reed.

Save the Date for a special Mass: Easter Sunday, April 12 at 2 pm.

Montecassino Abbey is welcoming the 2020 Mater Dei travelers, their family and friends, alongside visitors to the Abbey for a special Easter Sunday Mass on April 12, 2020 at 2 pm.