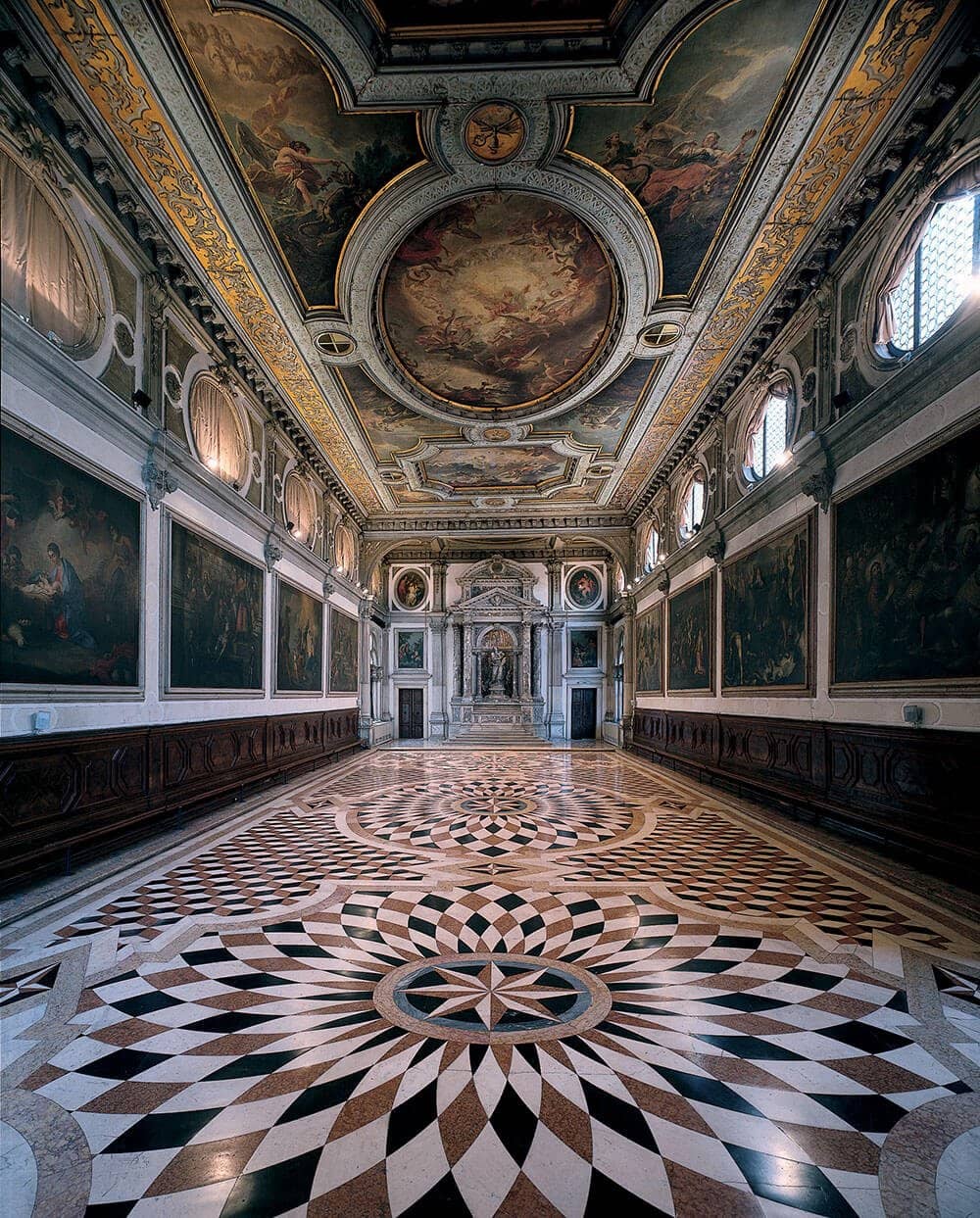 Let’s share a new favorite place in Venice, Italy with you. A gem in the heart of La Serenissima as Venezia’s locally known: The Scuola Grande di San Giovanni Evangelista.

Only occasionally open to the public, this historical complex is a must-see when you get the chance. The Scuola is also the exclusive venue for the final highlight concert for our 2023 Cantiamo Incantato Concert Tours travelers, their families and friends.

When you venture away from the crowds in Venice, mere minutes from busy St. Mark’s Square and Rialto Bridge, you’ll enter the Sestiere di Canareggio. Venice, like most Italian cities, consists of neighborhoods, each with its own identity and characteristics. It’s here where you find hidden gems that you’ve never heard of before but won’t regret visiting. The Scuola Grande San Giovanni Evangelista (SGSGE) is one such gem in the heart of la Serenissima. SGSGE is of the six “scuole grandi” (great schools) in Venice, which were religious and charitable lay organizations. Today, the stunning historic complex is home to a museum, and hosts important concerts, exhibits and conferences.

On Thursday, April 6, 2023, the LCHS Choral Artists directed by Dr. Jeff Brookey will present the final highlight concert of their CANTIAMO concert tour in the centerpiece of the Scuola, the Sala Capitolare.

Founded in the 14th century, Scuola Grande San Giovanni Evangelista was a lay brotherhood devoted to the Evangelist John. The brotherhood was composed of wealthy merchants and artisans, who came together to participate in religious activities, provide charitable assistance to the community, and commission art and architecture to adorn their meeting place.

The building that houses the Scuola is a fine example of Venetian Gothic architecture, and it was built in the 15th century. The exterior of the building appears simple, but the interior is richly decorated with frescoes, paintings, and ornate architectural details.

The highlight of the building is the Sala Capitolare, which is the main hall of the scuola and is the largest hall of all the Scuole Grandi. The hall is adorned with frescoes and canvases painted by some of Venice’s most famous artists, such as Tintoretto and Veronese. The Sala Capitolare is covered in frescoes, including works by Tintoretto and Veronese, as well as other artists of the Venetian School. The school also houses the church of San Giovanni Evangelista, that dates back to the 14th century and was the private church of the Scuola Grandi.

The Scuola Grande San Giovanni Evangelista is occassionnaly open to the public for visits, and it is an interesting place to see for anyone interested in Venetian art and history. SGSGE hosts concerts, exhibitions and cultural events to keep preserving the heritage of the Scuola. It’s a magical spot to appreciate the art and history of Venice, as well as the cultural and social aspects of the life of the city’s wealthy merchants and artisans in the past centuries.

For a video of our October visit for the LCHS Choral Artists to La Scuola Grande di San Giovanni Evangelista, click here.

Cannaregio: A look at Venice’s most authentic authentic neighborhood

The sestiere (district) of Cannaregio is one of the six neighborhoods that make up the city of Venice, and it’s one of our favorites for many reasons.

Cannaregio is located in the north of the city and one of the less touristic areas of Venice. It’s a great place to explore the local lifestyle, with many small streets and canals, as well as one of Europe’s most ancient Jewish Ghettos. Especially early in the morning and in the afternoon and evenings, Cannareggio gives you an idea of the daily life of Venice’s inhabitants — away from the tourist crowds.

In addition to the Scuola Grande di San Giovanni Evangelista, Cannaregio is also home to other noteworthy sights, including the church of Madonna dell’Orto, which contains works by Tintoretto, and the church of Santa Maria di Nazareth, which is also known as the “Madonna dei Miracoli” — a prime example of Venetian Renaissance architecture. Additionally, the district is home to several popular attractions like the Guglie Bridge, one of the best spots in Venice to capture a sunset.

When visiting the Scuola Grande San Giovanni Evangelista, try to make time to take in some of the other interesting sights and cultural places in Cannaregio, plus you’ll get a glimpse look into the local lifestyle of the Venetians and those who call Venice home.

The LCHS Choral Artists directed by Dr. Jeff Brookey will be presenting an exclusive concert at the Sala Capitolare, the stunning fresco covered highlight hall of the Scuola Grande di San Giovanni Evangelista. The performance on Thursday, April 6, 2023 a 7:30 pm is a special event for the singers from La Cañada High School in California, their families and friends. A small number of tickets will be available to the public and can be reserved by emailing us to concierge@inside-europe.com. Tickets will be assigned on a first come, first served basis. On the maximum number of audience members is reached, for security reasons, SGSGE will not allow additional people to enter.