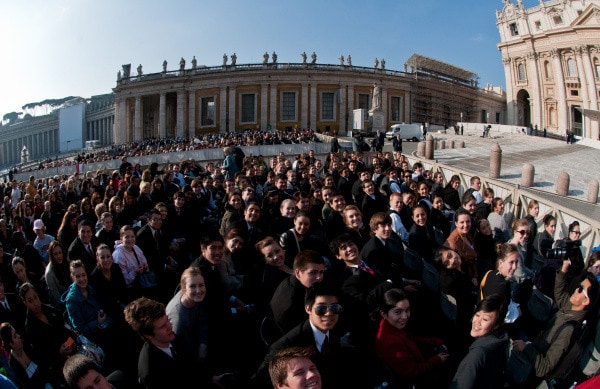 Josh Paz was a little nervous as the Mater Dei High School choir waited for the Pope to arrive in St. Peter’s Square, Vatican City, on Wednesday morning.

“What if we mess up?” he thought. “What will P reaction be?”

About 130 members of the choir, along with about 100 parents and eight visual-arts students, have been traveling and performing in Italy since last week. Singing at this P audience was to be one of the highlights of their trip.

The students were rousted from their beds at 5 a.m. and most of them were ready, in tuxedos and dresses, when their bus was scheduled to leave their hotel at 6 a.m.

Scott Melvin, the choir director, rushed around collecting a few kids who had overslept. “We had to throw them on the bus in their pajamas,” he said. “They had to get changed on the bus.”

By 7 a.m., the group had arrived outside St. Peter’s Square, queuing up to get through security with about 20,000 other pilgrims. They took seats in the front rows, about 50 yards from where the Pope would preside on the steps of St. Peter’s Basilica.

Then they waited. Some made last-minute purchases of rosaries that the Pope would bless.

To help pass the three hours before the audience was to begin, the choir sang Hosanna in Excelsis by Brent Pierce (see video below). The crowd’s response was warm and enthusiastic. A man approached the group saying “Complimenti, complimenti,” Italian for “compliments.”

At about 10:30 a.m., Pope Benedict XVI arrived in his Pope-mobile, driving around the audience in the square.

The typical and so-called light lunch of local Mezze may make you consider skipping dinner — not that you should!

The feast you see above is offered at our favorite family-owned winery just outside the capital city of Heraklion — prepared fresh every day.

On the menu is what the Paterianakis sisters, their parents and team are eating themselves, cooked by mom.

Not pictured are their all-organic wines that pair perfectly well with these dishes.

Here at the Domaine, just as at many typical tavernas, a small dessert is offered complimentary by the hosts.

Make sure to leave a little room (or a lot).

STAY iN THE KNOW

Travel stories, tips and visuals. Curated by us for you. Delivered to your inbox at a relaxed pace. We have been there!
Thanks for subscribing!