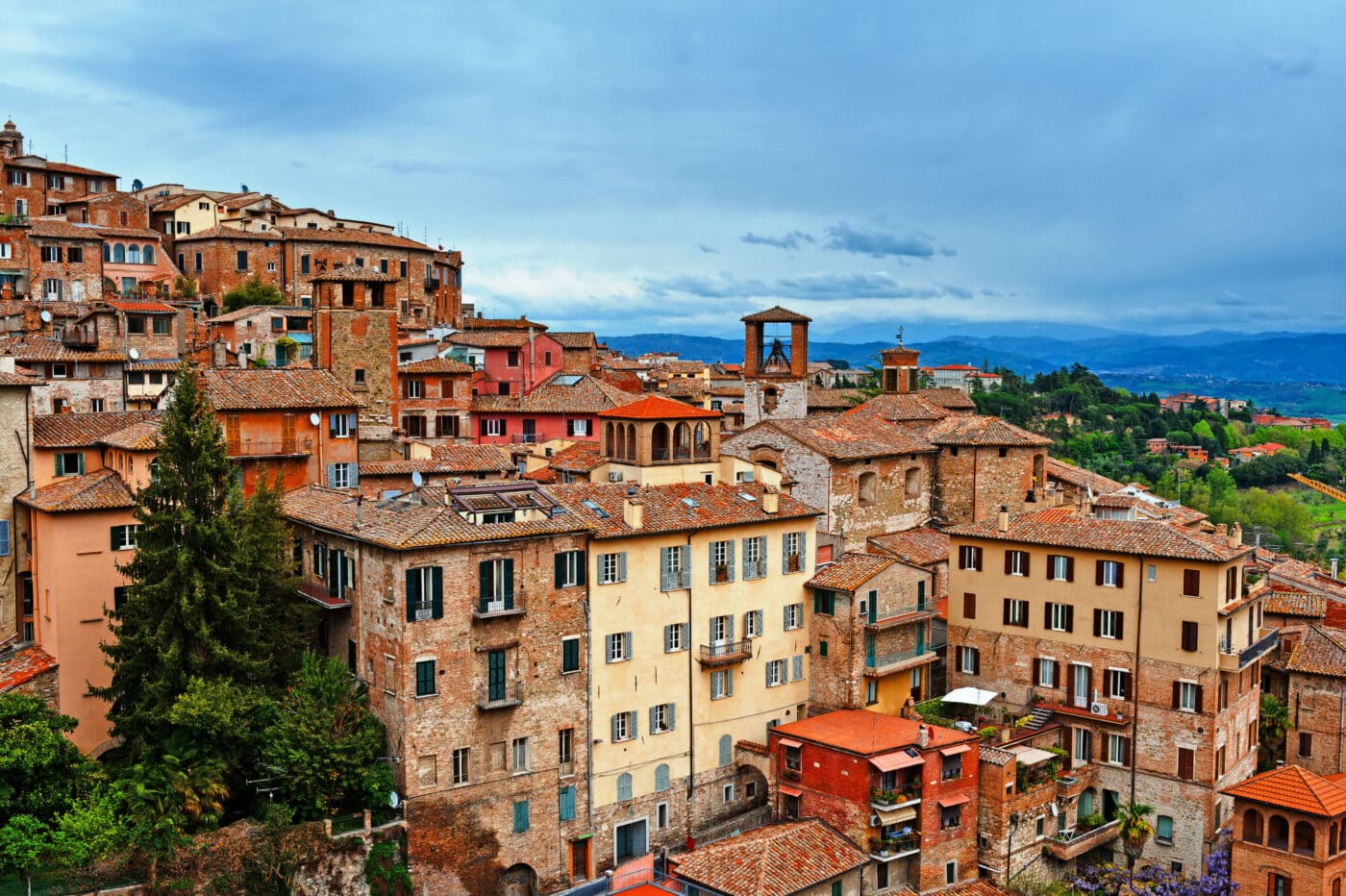 No Perugia visit is complete with a visit to the Duomo di Perugia, in Italian called Cattedrale di San Lorenzo which translates to Cathedral of Saint Lawrence. The impressive building is not only THE church in Umbria’s capital city, but also the stunning backdrop of the beautiful Piazza IV Novembre in the historic center of this must-see ancient Italian hilltop town.

The Cathedral of Saint Lawrence is a remarkable building. It is considered one of the main symbols of the city of Perugia — built over many centuries and reflects the different artistic currents that shaped the history of this very historic city in the center of Italy.

The bell tower of the Duomo is one of the most distinctive features of the cathedral, standing at 82 meters tall, it was built in the 13th century as part of the original Romanesque structure and it offers a panoramic view of the city of Perugia and the surrounding hills. The Cathedral also houses a number of works of art of great value, including frescoes by the 14th-century painter Bartolomeo della Gatta.

While the first church on this location was built in the 900’s, the building that is still standing on the site today began its construction in 1345 and took until 1587 to finish. Interestingly, the outside of the cathedral was never fully completed to the original design. The exterior also features pink and white stone that was taken from the Cathedral of Arezzo in the 1300’s. This stone was eventually only completed on the side of the church that faces the Fontana Maggiore.

The Cathedral of Saint Lorenzo features late Gothic style architecture as can be seen in it’s pointed arch windows as well as in the symmetrical triple aisles inside the church. Additionally, octagonal pillars and a vaulted ceiling showcase additional Gothic features inside. The pulpit was also created in keeping with the Gothic style and in the fourteenth century was adorned with fragments of the area where San Bernardino of Sienna preached. In the eighteenth century, faux marble was applied to many of the interior features of the church.

There are a number of important statues and other artwork that make a visit to the Cathedral of Saint Lorenzo a must see. A bronze statue of Julius III stands prominently in honor of the man who helped restore the rights of the citizens of Perugia after they were taken from Pope Paul III in the 1500’s. Notably, visitors will also find the Chapel of San Bernardino inside the cathedral. This chapel features artwork from Federico Barocci that dates back to 1569. The cathedral also features another smaller chapel and sacristy that showcase ornate frescos by Giovanni Antonio Pandolfi di Pesaro dating back to 1578.

In summary, the Cathedral of San Lorenzo in Perugia is a beautiful, Gothic style church with a rich history that features centuries old artwork and shouldn’t be missed while exploring Italy.

Even better than just visiting this stunning place is hearing the LCHS Choral Artists perform at the Duomo di Perugia. So mark your calendars and join this highlight performance directed by Dr. Jeff Brookey on Monday, April 3, 2023 at 2:30 pm. Admission is free. Donations for the upkeep of the cathedral welcoming the talented singers from La Cañada High School in California are however much appreciated.