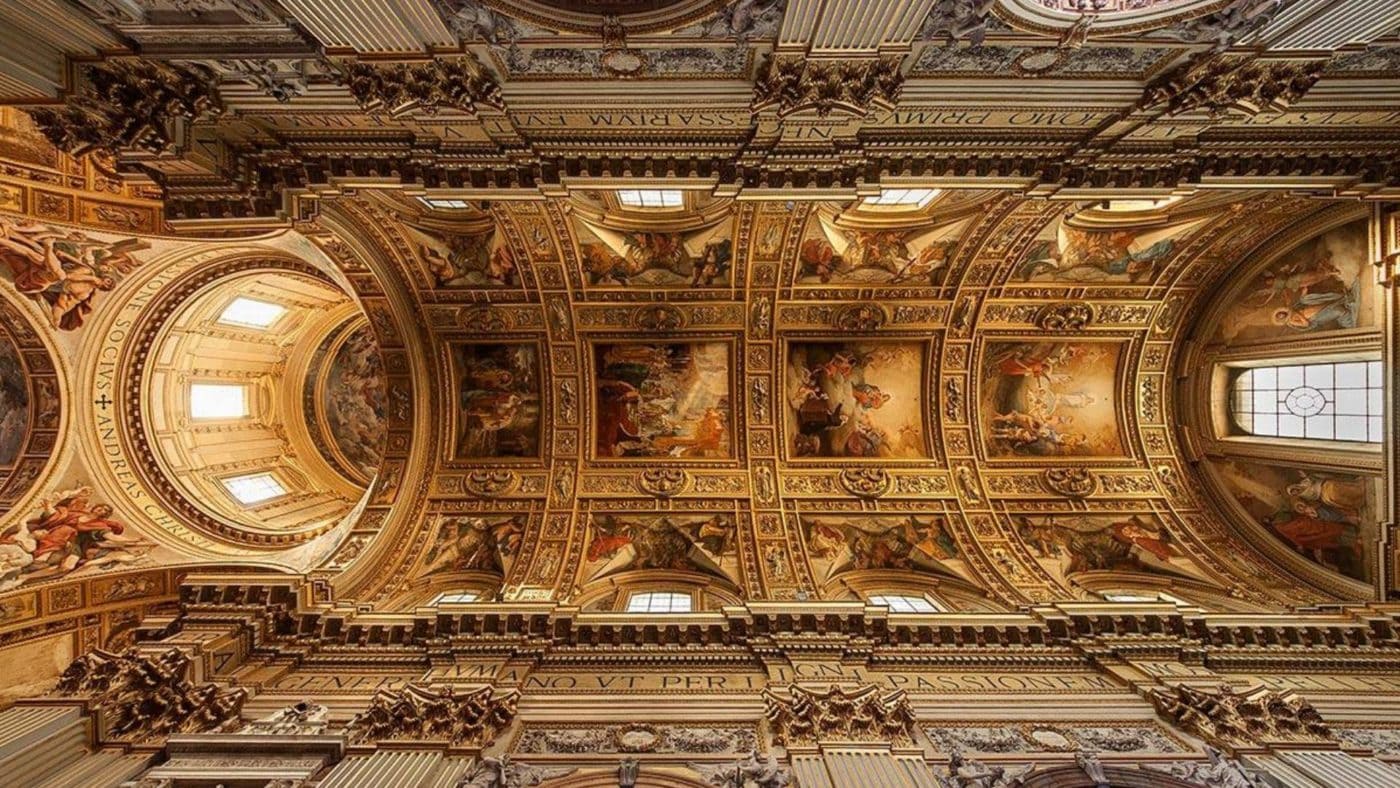 Located in the heart of Rome, Sant’Andrea della Valle is one of those hidden gems that should be on your must-sees in the Eternal City.

This Basilica on Corso Vittoria Emmanuela is a stunning example of the splendid architecture that makes Rome’s catholic churches such attractions. The acoustic’s incredible and make for the perfect setting for the LCHS Choral Artists’ Rome highlight concert on Sunday, April 2, 2023 at 8:30 pm.

Construction for Sant’ Andrea della Valle started in 1591 under the designs of Gian Francesco Grimaldi and Giacomo Della Porta and continued in the following century. In 1608, Maderno, charged with completing the building, enlarged the transept and raised the dome. The high and sumptuous travertine façade dates back to the second half of the 17th century and was added by Carlo Rainaldi, who resumed Maderno’s design, accentuating the plasticity of the construction elements and the chiaroscuro.

The plan of Sant’ Andrea della Valle is based on a Latin cross.

Structurally there is a vast nave flanked by eight high chapels that emphasize the vertical rhythm of the building. One of them, the Barberini chapel, is also known as the “Cappella della Tosca” because part of the plot of Puccini’s opera is set here. Two further side chapels overlook the apse, rich in gold and frescoed by Mattia Preti. At the ends of the nave, there are two rare testimonies of the ancient Vatican basilica, transferred here in 1614: the funeral monuments of popes Pius II and Pius III Piccolomini, the first dating back to about 1470, the second to the early 16th century.

The beautiful dome built by Maderno and inaugurated on 6 November 1622 was the second highest in Rome after St Peter’s. Worth of note are the capitals of the lantern of the dome, with cherubs that form a sort of volute with their wings: they are thought to have been designed by the young Francesco Borromini, called to Rome a few years earlier by his uncle Carlo Maderno to work on the construction site of St Peter’s. The interior of the dome is decorated with the wonderful frescoes made by Giovanni Lanfranco, a baroque masterpiece of illusionism that brings the sky into the church. The work was carried out concurrently, and probably in competition, with the fresco of the pendentives and the apsidal transept painted by Domenichino between 1621 and 1628. (Main source: Rome tourism)

Want to see what this stunning venue for the LCHS Choral Artists looks like as you enter?
Inside Europe travelers Juan and Lucia took a video during their 2022 summer visit.

The LCHS Choral Artists Rome highlight concert directed by Dr. Jeff Brookey takes place on Sunday, April 2, 2023 at 8:30 pm. The entrance is free. Prior to singing at Sant’ Andrea della Valle, the 118 singers from La Cañada High School in California will also be the featured guest choir for Palm Sunday Mass at St. Peter’s Basilica at the Vatican.